Some cookies on this site are essential, and the site won't work as expected without them. These cookies are set when you submit a form, login or interact with the site by doing something that goes beyond clicking on simple links.

We also use some non-essential cookies to anonymously track visitors or enhance your experience of the site. If you're not happy with this, we won't set these cookies but some nice features of the site may be unavailable. 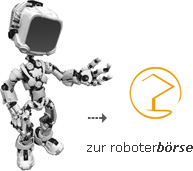 The traditional company FAMAG Werkzeugfabrik GmbH & Co. KG has existed in Remscheid since 1865 and stands for drilling- and milling tools of the highest quality worldwide. In order to remain internationally competitive, not only in the product area had to be set on innovation, but above all in production on flexibility and increased productivity.

Here, the FAMAG Werkzeugfabrik made a resounding success with the automation with / without industrial robots. What began as an in-house department soon became a separate business.

1999- START OF ROBOTICS AND AUTOMATION

The department Robotics and Automation was founded in 1999 by the FAMAG Werkzeugfabrik GmbH & Co KG in Remscheid. Remscheid is an independent city in the North Rhine-Westphalian administrative district of Düsseldorf. It is after Wuppertal, Leverkusen, Solingen and Bergisch Gladbach, the fifth largest city of the Bergisches Land. Bergisches Land is a region in NRW.

2005- MOVING TO THE RATHER STREET 22, REMSCHEID WE STAY TO YOU LOYAL

We needed more space, not only for our used robot offerings but also for the special construction of automations. With the new space, we now have more opportunities to create large linked automations and test them in a secure environment. In the additional offices you can reach us directly.

In 2015, FAMAG Werkzeugfabrik GmbH & Co. KG celebrated its 150th anniversary. Only through our continuous adaptation to the market and the continuous expansion of automation with industrial robots by the team "Robotics and Automation" in the production of drills, our company could survive even through difficult times.

The completion of our new training room is imminent. Here, we can provide your specialists with everything you need to know about handling an industrial robot in your company in a pleasant and relaxed environment.

User questions are collected on site and, if necessary, points of the training objectives are supplemented or changed.

If we do not have the desired industrial robot with control in the house, we also offer you an in-house training directly in your company. Direct work on the existing facility / cell.

Have we aroused your interest? This is only an excerpt from our previous projects.